I ordered a sampler pack of Zeal mechanical keyswitches to test out on my Ultimate Hacking Keyboard (UHK) and they arrived today.

The UHK is a crowd-sourced split mechanical keyboard that can be joined together and used in a similar way to typical 60% keyboards (like the Poker3). It’s programmable with the provided Agent software, which isn’t quite as flexible as the venerable qmk_firmware, but it provides a super easy GUI for configuring key layouts. The model I got was a pseudo-ISO layout with Kailh Brown switches (similar to Cherry MX brown switches, i.e. quiet and a little tactile - the Kailh’s have slightly heavier spring weights than the Cherry equivalents so they feel marginally more tactile also). The layout isn’t exactly ISO UK - it’s a compromise. They added an extra key next to the left shift, which sort-of duplicates the key above the small enter key on the right. It’s near enough though to be possible to get used to it quite easily.

My plan was to replace 8 keyswitches from my current UHK (which I have been using, on and off since ~June 2018), with 8 different keyswitches that ZealPC sell. To be more exact, 2 types of switch, each in 4 different spring weights. For this keyboard I’m only interested in tactile-type switches and not linear (so I left the linear ones for another time). Zeal do 2 main types of tactile switch - the Zealios V2 and the Zilents V2. The Zilents are the same as the Zealios except they’ve added dampeners to the stems.

I’ve used Cherry MX-type keyswitches with o-rings before to make them quieter, but it’s never made much of a difference to their sound (o-rings only affect the bottoming-out sound, they don’t affect the sound of a key returning to the top). These Zilent switches use a different approach, they’ve added tiny dampeners to the stems, top and bottom, which don’t make a huge different to the feel of the key (which is one of the drawbacks of using o-rings), but they make a huge difference to the sound. 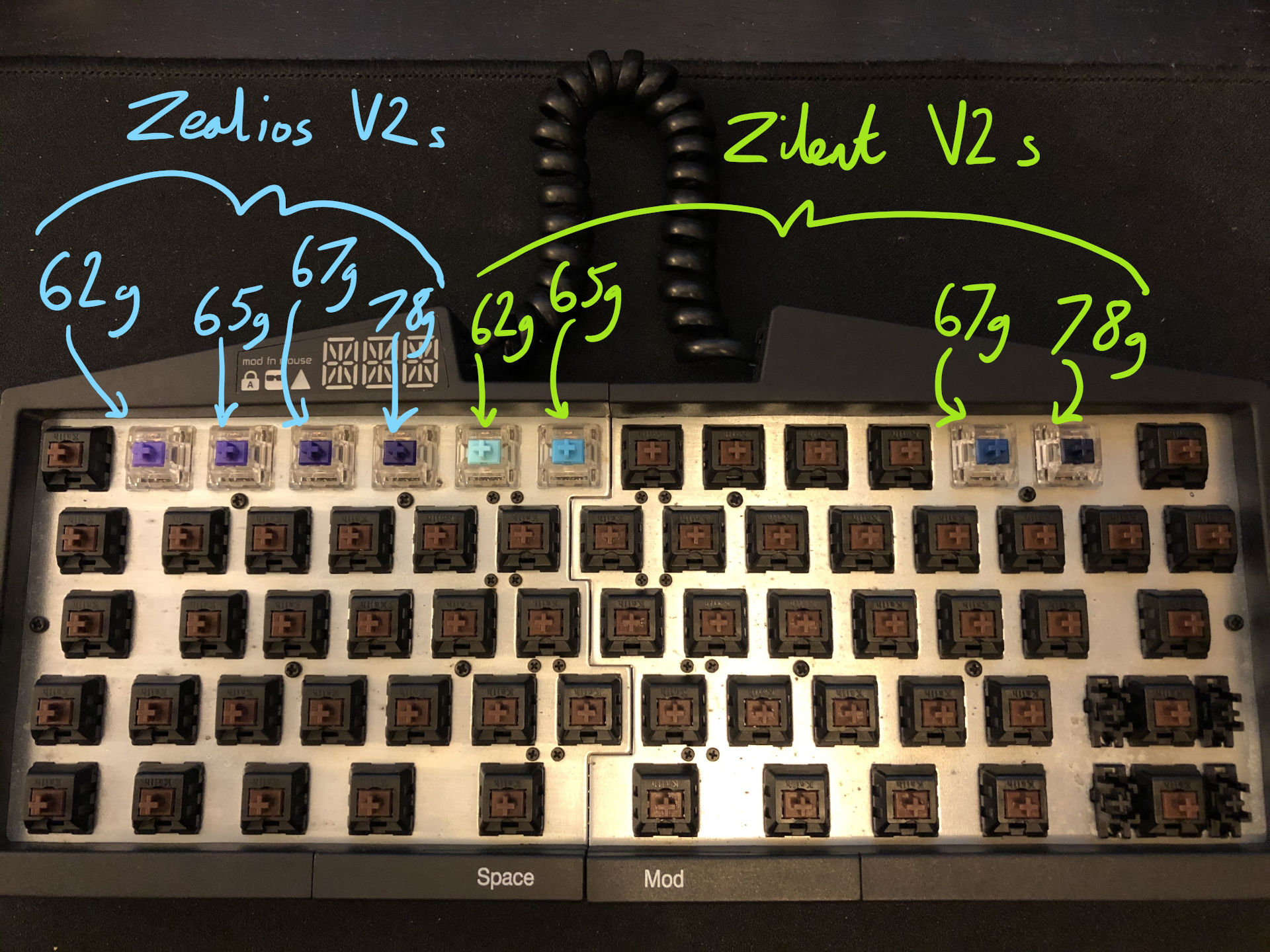 Here is how each of the keyswitches sound:

It took me a few hours to de-solder the old switches and it was pretty nerve-wracking (at least the first switch was). I tried using de-soldering wire to soak up the melting solder but that didn’t work at all. But using the cheap desoldering pump worked well as long as I realised I needed to melt the solder on the contact and immediately use the pump to extract the solder. This still left enough solder hanging around, especially between the PCB and the steel plate, where I couldn’t get at it. This meant the switches were pretty resistant to coming out and took a fair amount of force to extract (I ruined a few of the Kailh brown switches in the process, the plastic housings are not very resilient).

My initial impressions of trying out these fancy alternatives to the usual Cherry MX compatible switches is that they are definitely noticeably more tactile. There is a pronounced tactile bump at the top of the travel, which is not dissimilar to Topre switches. The Zilent switches are much quieter than the Zealios (and Kailh browns), they are basically as close to silent as you could get from a mechanical switch. The comparison between the stock sound and feel (with the Kailh switches) to the Zilent switches is pretty huge - I wasn’t sure what to expect since the UHK has a thick steel plate that really amplifies the sound of key presses (but the case is small so it doesn’t resonate as much as it would with a large keyboard). I really like both the Zealios and the Zilents (which was the most unsurprising conclusion ever), but for this small UHK that I would like to use in the office etc. I think I’ll go for the Zilents. At another time I think I will get a set of Zealios for another keyboard and I’m interested in trying some silent linears (e.g. the Sakurios or Roselios) in my Poker3 to turn it into a small gaming keyboard.

When it comes to the 4 weightings, since I tend to prefer light keyswitches to heavy ones I was mostly curious as to how tactile the lightest ones were and whether they’d be worth the change from the stock switches I’m using. From the little testing I’m able to do with just one key per switch+weight, even the 62g switches are decently tactile and seem really nice to type on.

My next step will be to fit some metal things to the PCB (after desoldering every switch) to mod this keyboard so I can swap keyswitches without soldering/desoldering. I’ve no idea what those little metal things are called, let’s call them switch boots. So as I write this, 128 little switch boots are on their way to me. When they’ve arrived and a set of Zilent V2 62g switches have arrived, it’ll be time to give this UHK a huge upgrade.